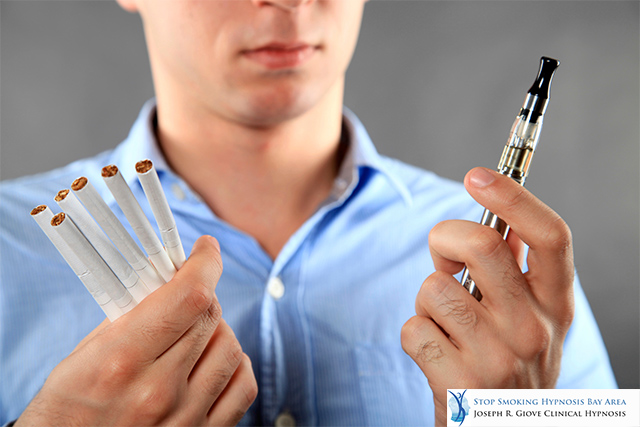 As you can see, it is a long list of diseases, illnesses and cancers that have serious, life-threatening health effects. For the people that want to reduce, cut down or quit smoking there are a variety of options on the market aimed at helping you quit, such as nicotine patches or chewing gums, e-cigarettes or hypnotherapy, which has proven to be incredibly effective method.

As a health professional who has been working in the field of smoking cessation for over 25 years, clinical hypnotherapist Joseph R. Giove is particularly concerned about the growing trend of e-cigarettes. He notes that he has seen a rise in clients coming to him for help after failed attempts at quitting smoking using methods such as switching to e-cigarettes.

In this article we will discuss the following points related to e-cigarettes and the myth that they aid in efforts to quit smoking conventional cigarettes:

E-cigarettes are a nicotine delivery system, and function by heating flavored nicotine and other chemicals electronically, just enough to vaporize. Puffing an e-cigarette activates the heating device which vaporizes flavored liquid which the user then inhales. This process is called ‘vaping’. It is the aforementioned chemicals that have been added to the nicotine that are now being investigated, and the results are shocking.

One of the more serious side-effects of E- Cigarettes is something called the “Popcorn Lung.” It gets its name from the effects that first appeared in workers in microwave popcorn factories. In these factories they also produced the artificial butter accompaniment, and it was chemicals from this which led to workers contracting what is now known as ‘Popcorn Lung’. The link between ‘Popcorn Lung’ (also called bronchiolitis obliterans) and e-cigarettes was recently discovered by the Harvard School of Public Health.

Popcorn Lung is a debilitating and irreversible respiratory disease. As previously mentioned, this disease is similar to chronic obstructive pulmonary disease. This causes small scarring in tiny air sacs inside the lungs that lead to shortness of breath and intense coughing. Basically, the chemicals that are found in e-cigarettes are restricting the blood and oxygen flow in the lungs.

The Problem with E-Cigarette Flavors

Another troubling problem with e-cigarettes is that they are flavored, often with fun and tasty sounding names such as Cotton Candy, Fruit Squirts and Cupcake. This is troubling for the following reasons:

It is not hard to see that the big tobacco companies have found a new way to get the youth of a new generation addicted to their product.

The same Harvard study we previously referenced found at least one of the three extremely toxic chemicals found in regular cigarettes in over 50 flavors of e-cigarettes. The chemicals are diacetyl, acetoin and 2,3 pentanedione. In a quote from the report, author Joseph Allen says “the amount of diacetyl in 39 of the e-cigs exceeded the amount that was detectable by the laboratory.”

This is definitely a troubling statistic. If the amount exceeds what we are even able to measure, than how much of these chemicals are actually in these e-cigarettes?

“Vaping” an e- cigarette may seem like a healthier alternative to a conventional cigarette, but they contain many of the same chemicals, as well as additional chemicals. One of these, which is found in the flavoring component of e-cigarettes, is formaldehyde, and will therefore not only cause addiction but also severe lung damage.

There has been an aggressive attempt by tobacco companies to get younger people to buy e-cigarettes. Since the government has not put many restrictions on the sale and production of e-cigarettes, they are taking this opportunity to target youth. Teen use alone has tripled since 2014, mostly due to the flavors that are offered by e-cigarette companies. In April 2014 the United States Food and Drug Administration proposed banning the sale of e-cigarettes to people under the age of 18.

The problem is that because e-cigarettes are so new, there is insufficient data to sway lawmakers to take action at the federal level. At the state level, 46 States have enacted laws that will prevent the sale of e-cigarettes to minors and a further 12 now require childproof packaging.

Youth and adults alike are not receiving proper health information regarding the risks associated with e-cigarettes. They are clearly not a viable alternative to conventional cigarettes, nor are they a useful tool to quit smoking.

One of the most effective tools for those wishing to quit smoking is the proven method of hypnotherapy. Posing no additional risk factors such as increased carcinogen or chemical intake, Joseph R. Giove and clinical hypnotherapist therapy gently rewire your brain so you are no longer falsely dependent on cigarettes, allowing you to live a healthier, smoke-free lifestyle.