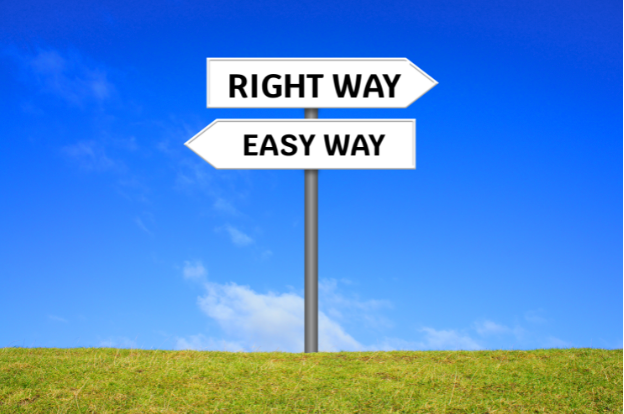 Thousands of people have bought Allen Carr’s stop smoking the Easy Way book and short seminars. Some of them stopped smoking. What’s most interesting though is what happened earlier the same day that Allen Carr, himself, stopped smoking.

What happened to Allen Carr sheds some light on the reason he got a self-described “revelation” to give up cigarettes.

Alan Carr admitted that he had gone to an unnamed hypnotherapist.

That’s right, and in the decades that followed, before his death from lung cancer in 2006, he never mentioned the hypnotherapist by name.

Carr, an accountant, had no understanding about hypnosis, other than the fact that his own wife said it was worth a try, and sent him to one.

As it turned out, the hypnotherapist did enable Carr to stop smoking later that day SAME Day (July 15th 1983) even though Carr failed to credit the hypnotist with his success.

According to his books, something stuck with him from those sessions with the hypnotherapist. Carr went on to write a book called, “Stop Smoking the Easy Way,” and held some seminars before he passed away.

It is wonderful that Allen Carr was such a stop smoking advocate, as thousands of people stopped smoking, at least for a while, after reading the book or going to a seminar.

Actually, Carr’s method is more of a mantra than a “method.” He would say that cigarettes are… “not a positive, so their absence should not be mourned.”

Although that theory sounds simple – even banal – Carr could easily talk about it for hours. He drained one woman into quitting: “I was bored into giving up.”

Give Credit Where Credit Is Due

My point is that, rather than simply “cashing in” on his success that he had that day he went to the hypnotherapist, Carr could have at least given that hypnotherapist and hypnotherapy a little credit before he, the world’s self proclaimed anti-smoking guru, became a millionaire as a result of his marketing efforts.

He never really had an understanding for clinical hypnosis and didn’t realize the hypnotist that he saw earlier that day had unplugged some of the triggers that helped him walk away from cigarettes.

Once again, clearly something stuck with him from his hypnosis sessions, otherwise he wouldn’t have quit that very same day. 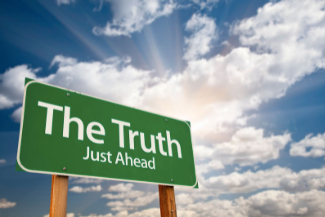 What was it, then?

In the simplest terms, clinical hypnosis places the seeds of different and positive thoughts and habits deep in your mind during the hypnotic trance, and sooner or later, those changes take root and prosper.

Clinical hypnosis is not just visual hocus pocus. It’s the practical application of neuroscience. There’s a big difference between “light visualization” and clinical hypnosis, which of course, an accountant wouldn’t know.

I’m actually glad that people are serious enough about stopping smoking that they would take the time to read up on the subject.

I’ve helped thousands of people over the last 30+ years become former smokers by educating them about nicotine’s addictive hook and using clinical hypnosis and neural reprogramming in a very systematic, effective way.

Choosing the Right Way Over the Easy Way

More than half of the people I’ve helped have either tried Allen Carr’s “method,” or read part of it and decided that they wanted to do it the right way, and not just the easy way “again.”

Every time someone tries and fails with another attempt at stopping smoking it gets harder and harder. It deepens the addictive hook in the brain so that opting to take the easy way out is not the right way, and makes quitting subsequently more difficult. There is no need to set yourself up for failure.

Simply, the easy way isn’t necessarily the most effective way to quit. You need to quit the right way for it to stick. My Quit Smoking Virtual Clinic helps you quit for the long run, not just the short term.

Celebrity endorsements are just silly. Think about it. How can they be verified by the average person? Did the celebrity pay, did they read the book, did they take the seminar, have private coaching, were they paid for the endorsement? I’m sure that some have stopped, but certainly not all of them. We’ll never know. 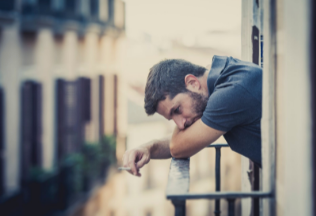 What we do know is that celebrities are all trying to improve their image, and the image of them smoking is very bad PR for them and their incomes. Are you supposed to ring up Sir Richard Branson and ask him if he’s still smoking or not?

Also, it doesn’t take much Googling to see videos of the beautiful actress Goldie Hawn smoking in 2015 backstage with her daughter, Kate Hudson, when she supposedly stopped with the Easy Way prior to 2011.

Anything that’s marketed as an easy remedy for a stubborn addiction like nicotine is probably not going to last. Otherwise everyone would have done it and there’d be no smokers.

Unsolicited endorsements from real people, like you and me, are more trustworthy than celebrity gossip. None of mine are solicited and all are from typical people without the privilege of celebrity.

My program is all inclusive and comprehensive. We don’t leave you high and dry when you may need us…not when it’s convenient for someone else.

My Quit Smoking Virtual Clinic has a 100% success rate provided the person doesn’t give up her or his desire to quit. This is because I give them Lifetime Access to the Virtual Clinic vs limited access offered by the Allen Carr people.

If you need a backup seminar from the Easy Way “facilitators” you will need to do it when it is convenient for them, not necessarily for you.

The Allen Carr people’s quit smoking group seminars are 5-6 hours long, and cost “FROM” $450 (Red Flag: not sure why that says FROM, and doesn’t simply give the price range and explanation of the higher than $450 possibility).

If you want a single one-on-one session with a facilitator there, the price starts FROM $1795. The “trained” facilitators are trained by who? What type of training? What type of medical endorsements are there? Do they just simply read a script after you’ve given them your hard earned money? These are many important questions to ask, and these are some that should be asked and answered, in my opinion. 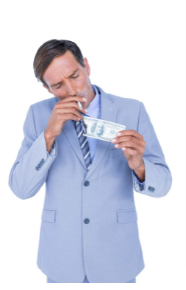 My Virtual Clinic is $197 with lifetime access, and has a 60-day money back guarantee.

My Private Coaching program is one-on-one, and not a group of strangers that you may not want to know your business. It is $897 for life, not “from” $897; this includes lifetime access to the aforementioned Virtual Clinic, not limited access to assistance as their online videos may not be there for you after 30 days. Why Pay again?

A True Advocate for Smokers’ Health

Remember, Allen Carr was initially an accountant who smoked.

He certainly became an ambassador to raise awareness about stopping smoking, and I’m sure he did his best to help the masses, but he, himself, is no longer with us.

What’s important is that it’s really about the science of stopping smoking, not just the claims and scripts written by a former smoker trying to make a buck on the multi-billion dollar tobacco industry.

I am not here to put down someone else’s program versus mine. I am just pointing out the differences that may not be obvious to someone desperate to quit smoking or vaping.

In the end, whatever it takes to stop smoking for GOOD is the way to do it, and I completely support every legitimate therapist’s method and approach to do that.

But most people’s goal is to not simply stop smoking for the time being, but to quit for good, and get healthier in the process.

That’s why I have been an advocate for smokers’ health and freedom for over 30 years. My commitment is unswerving.

The Science of Nicotine Addiction and Quitting Smoking

So what is the science of stopping smoking? 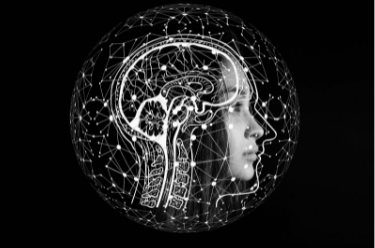 First of all, Clinical Hypnosis is the key when combining the power of neural reprogramming with neuroscience.

My background working with NASA and heading a biomedical research firm, before I became a clinic hypnotist 30+ years ago, gave me a unique perspective on how our brains and bodies work together for optimal health and recovery.

Nicotine stimulates neurotransmitters that our brains and bodies naturally produce, like acetylcholine. Over time, our acetylcholine receptors adapt to this poisonous surrogate.

This adaptation confuses the brain, and begins rewarding us with “good” feelings for inhaling the poisonous smoke, something nature never intended for the brain’s reward circuitry.

When the nicotine wears off, the brain is now seeking a level of neurotransmitter stimulation that it can’t possibly produce naturally, thus leading to withdrawal symptoms and so-called “cravings.”

When we smoke another cigarette trying to get rid of these withdrawal symptoms, we reinforce the confusion in the brain, causing us to mistakenly believe that we need that next puff to feel normal again.

This neurochemical process in the brain reinforces also the behavioral aspects leading to the habit.

This is the tedious cycle of nicotine addiction.

The neurological and behavioral aspects of being hooked on nicotine, smoking, vaping, and chewing have multiple layers, both conscious and subconscious. All these layers must be addressed if we are to quit smoking permanently and completely.

In the last 30 years, I have helped thousands of people worldwide defeat addiction and quit smoking, addressing all these layers, by combining the power of neural reprogramming with neuroscience. This is what clinical hypnosis does. “Light visualization” does not. Period.

I also include, at no extra charge, Detoxification & Repair Nutritional Guidance. This normally would cost over $100 on it’s own, but it’s included with my program. To minimize withdrawal, and speed up your recovery, both mentally and physically, these specific recommendations are invaluable.

One of the most common triggers for smoking is stress and anxiety. That’s why I also include, at no extra charge, Stress Mastery & “Dolphin Breathing Technique” sessions.

These would normally be $600 but are also included.

These sessions help you discover how to reduce stress and anxiety, heal the damage to your lungs and heart, breathe easier, and relax the jitters that can come with quitting within 72 hours or less. 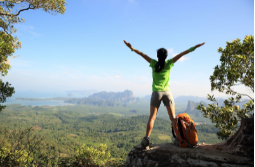 Let’s face it, on the road to full recovery from smoking, life happens, and we get too stressed or have too much to drink and we reach for that “one” cigarette or puff, thinking it will help. Unfortunately, that activates those old neural pathways that suck us right back into the addictive cycle.

This is why I also include relapse and relapse-prevention sessions at no charge. It’s also why I give Lifetime Access, so if you do relapse, you have the support whenever you need it…forever.

In my view, offering limited access to the “easy way” shows lack of confidence in their customers’ success. If they were confident, why would they limit access?

I designed my Quit Smoking Virtual Clinic to capture what I do one-on-one with people in-person at my San Francisco clinic. Everyone who opts for my program becomes a client of my Virtual Clinic who I commit to for life.

Me — a committed 30+ year veteran expert in helping people break free from nicotine addiction — not a trainee or inexperienced contractor trying to make a living.

That’s why my program comes with Lifetime Access, not just for the core quit smoking program but also for the:

…all so you can live a life where cigarettes become a distant memory. 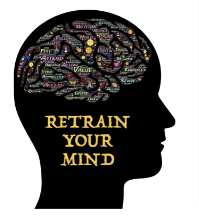 How To Get Started On Your Path of Freedom

Taking my free Quit Smoking Vulnerability Quiz will give smokers who want to quit a better picture of what clinical hypnosis can do for them, AND be the first step toward a smoke-free life of wellness and vitality.

Learn more about my Quit Smoking Virtual Clinic with a Private Coaching Option.

To your healthier, happier future,