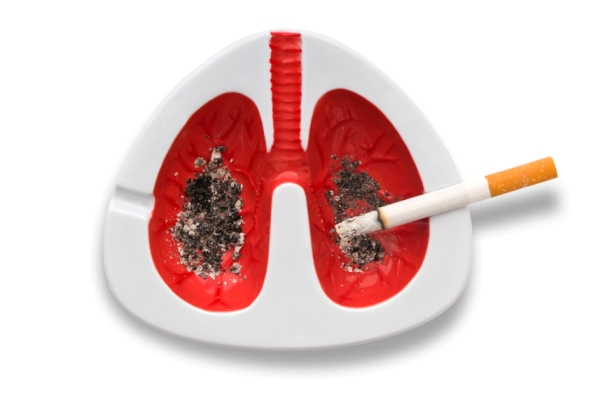 The link to smoking tobacco, cigarettes in particular, and lung cancer is widely known and has been heavily researched. Smoking cigarettes means ingesting some 4000 chemicals in addition to tobacco, and causes close to 90{cb12661b2b7fd86e618703ac3a1bf5df9897d897450d7668a57e7745cc225577} of its users to develop some form of lung cancer in their lifetime.

Doctors use a term called ‘pack-year smoking’. This term refers to how many packs of cigarettes are smoked per day multiplied by the amount of years smoked. For example, if a person smokes two packs per day for 10 years, then they would be a 20 pack-year smoker. One in seven people who smoke at least two packs per day will die from lung cancer. If you are a 30 pack-year smoker then your risk of lung cancer is even higher. Clearly we can see that the more you smoke, the higher your risk. However, it is important to note that smoking is dangerous at any pack-year level, and that there is actually no safe amount that you can smoke without increasing your risk of contracting lung cancer.

Smoking cigarettes is hands down one of the most dangerous things a person can do to their body. A common misconception is that smoking only affects the lungs In reality, it affects all muscles in the body including the biggest muscle: the heart. The lungs are in charge of taking in the oxygen the body needs in order to function, and muscles in particular rely heavily on this. Often times smokers will experience tightness, or even pain in their chest area after smoking a cigarette. Many smokers wonder why this is, and the answer is that your heart isn’t getting enough oxygen in order to function properly.

Smoking cigarettes causes the following to happen to your heart:

If chest pains are a common occurrence after smoking a cigarette, or anytime for that matter, then you should consult a physician. What the doctor will most likely tell you is to quit smoking immediately or be at significant risk for a heart attack. The most painless and chemical-free way to quit smoking is with Clinical Hypnosis and Hypnotherapy. Joseph R. Giove is a certified Clinical Hypnotist who can help you ease you into the life of a nonsmoker.

The Types and Stages of Lung Cancer

Lung Cancer is commonly broken down into two main categories:

Small Cell Lung Cancer is found in about 15{cb12661b2b7fd86e618703ac3a1bf5df9897d897450d7668a57e7745cc225577} of all lung cancer patients in the United States. Small cell is categorized as a cancer that is only found in one side of the chest, usually just one lung and the lymph nodes around it. This is called the limited stage. The next stage is called the extensive stage which involves the spread of cancer to other areas of the body.

These categories can be further broken down into four stages:

While only an in-person checkup with your physician can tell you the extent of the damage caused by smoking cigarettes, there are some symptoms that could give you an indication that you should talk to your doctor sooner than later. Additionally, consulting with a professional smoking cessation professional such as Hypnotherapist Joseph R. Giove can help the transition to a smoke-free lifestyle.

These symptoms occur in the lungs but there are others that can occur in places other than the lungs. Fatigue, blood clots, and loss of weight and muscle are some of these symptoms.

There are many, many medical studies that clearly show the link between smoking nicotine and its effects on the body, particularly lung cancer. Lung cancer is one of the most frightening outcomes of smoking, and it affects an alarming percentage of all smokers, 90{cb12661b2b7fd86e618703ac3a1bf5df9897d897450d7668a57e7745cc225577}. Lung cancer can affect anyone who smokes cigarettes, but increases in probability the more cigarettes smoked per day and of course the length of time spent smoking. This means that you have a 90{cb12661b2b7fd86e618703ac3a1bf5df9897d897450d7668a57e7745cc225577} chance of contracting lung cancer if you smoke and a 1 in 7 chance of dying from it if you smoke heavily for an extended period of time.

Joseph R. Giove is a certified Clinical Hypnotist with a proven track record of helping people quit smoking without any of the harmful chemicals and carcinogens that are often found in other ‘stop smoking’ methods. Quitting smoking today has been proven to add on average up to 17 years to your life, and Joseph R. Giove can help you achieve your goal.