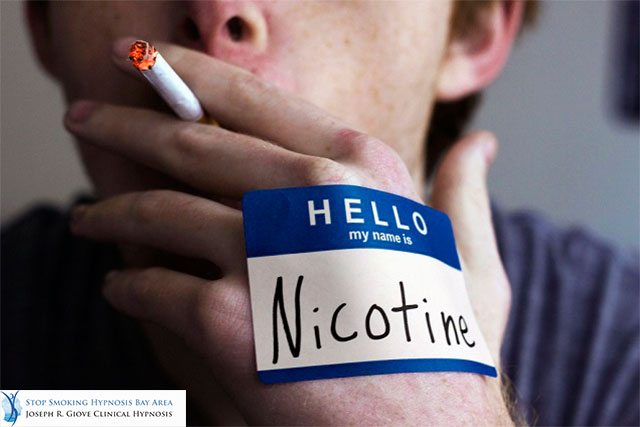 Smoking cigarettes is extremely dangerous to your health. More specifically, nicotine in general is bad for your health. Nicotine is found in all tobacco products including chewing tobacco, pipe smoking, and even nicotine replacement therapies such as patches and gums.

Nicotine use will affect almost every part of the body, especially the heart, lungs, and brain. There are some (very few) scientifically proven positive effects of nicotine, but the consequences of prolonged use are not worth the cost.

This article will discuss what nicotine is, how addictive it is, the possible health issues from long term use, the use in treating mental illness, other additives in cigarettes, and how Clinical Hypnosis and Hypnotherapy can help you quit smoking.

Nicotine is defined as “a toxic colorless or yellowish oily liquid which is the chief active constituent of tobacco.” Nicotine is an alkaloid that is found in certain plants such as tobacco and is synthesized in the roots and leaves of the plant. It makes up to 3 {cb12661b2b7fd86e618703ac3a1bf5df9897d897450d7668a57e7745cc225577} of the dry weight of the tobacco plant. When tobacco is smoked, nicotine is absorbed through the lining of small air sacs in the lungs and when used in chewing tobacco, it is absorbed through the mucus membranes in the mouth. After it is absorbed it is then free to circulate to the entire body through the bloodstream. This is why nicotine can cause problems for just about any part of the body.

How Addictive is Nicotine

Nicotine is so addictive it has been compared to being addicted to heroin or cocaine. The American Heart Association has said it is one of the hardest addictions to break. So what is the science behind the addictiveness of nicotine?

After nicotine is absorbed into the body it crosses the blood-brain barrier and enters into the brain. Once there, it binds to specific cholinergic receptors, which are activated by a neurotransmitter. These neurotransmitters normally maintain healthy actions by the body, such keeping the heart beating at a constant rate. Nicotine has a similar chemical make-up to these neurotransmitters, so it can activate these cholinergic receptors, but instead of the brain sending normal signals to the body, it sends out disruptive ones. After a period of smoking, the number of receptors in the brain increase in addition to developing a tolerance to the nicotine. This means that in order for a person to have normal brain function, they must continue to feed those receptors the nicotine they expect. When the nicotine level falls, the brain doesn’t function properly and people will begin to experience withdrawal symptoms. This means they need more nicotine to keep functioning. It also means they will have another cigarette. And then another. As you can see, this can end up being an endless cycle in order for a person to avoid the unpleasantries that come along with withdrawal symptoms.

Health Issues From Long Term Use

Smoking cigarettes will greatly reduce your life expectancy and increase your chances of getting cancer or other dangerous diseases.

While there are many negative side effects to prolonged nicotine use, there are a few positive uses for nicotine. One of those uses is for helping people with mental illnesses. Most mental illnesses involve schizophrenia, psychosis, or some other type of disorder that causes them to be agitated most of the time.

Nicotine, as well as being a stimulant for the brain, is also a relaxant. Nicotine releases many chemicals into the brain, two of which are dopamine and serotonin which act as relaxants and affect the brain’s reward center. Some mentally ill patients find themselves calm, relaxed, and focused after smoking.

Some patients that have alzheimer’s or schizophrenia self-medicate with cigarettes because they find that their minds are more focused. Nicotine has an interesting double effect with mentally ill patients. For someone who is agitated, it calms them. For someone who isn’t agitated, it increases awareness. These patients have debilitating diseases but smoking seems to alleviate some of their pain.

Other Additives in Cigarettes

There are over 4000 chemicals in cigarettes. They are all harmful to the body and most have long scientific names. For the sake of brevity, here are some of the more dangerous additives in cigarettes:

How bad is nicotine for you? It is very bad. It is one of the most addictive substances on the planet. It alters your brain and body chemistry to make you want more and more all the time. Nicotine is so bad for you that it was used as an insecticide in the past.

While some mentally ill patients find temporary solace in smoking a cigarette, smoking is still very dangerous to anyone’s health. Quitting smoking is the best way to avoid all the dangerous side effects that accompany prolonged nicotine use and Clinical Hypnosis and Hypnotherapy can help.

Joseph R. Giove has over 30 years of experience helping people quit smoking using Clinical Hypnosis and Hypnotherapy. He is a certified Clinical Hypnotist who uses no chemicals or carcinogens, such as nicotine replacement therapies do, to help you quit smoking. Gently altering the brain patterns of a smoker helps them no longer crave cigarettes and nicotine. Giving up nicotine and smoking will allow you to live a longer and healthier life and Clinical Hypnosis and Hypnotherapy can help!