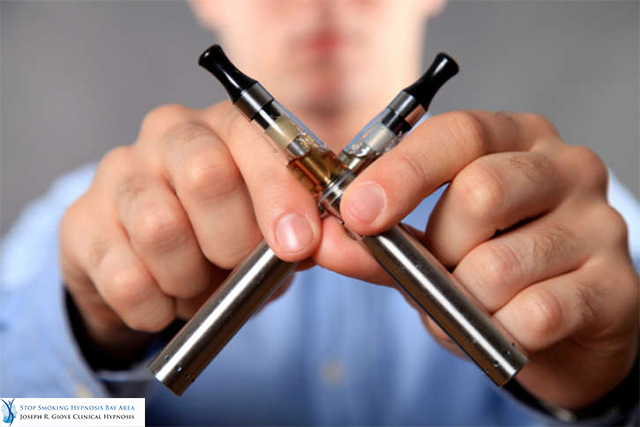 Ask any medical professional – and most Americans – what the keys to a healthy life are and they’ll likely name off things like diet and exercise. But high on that list will probably be a life free of smoking.

It’s no secret that smoking cigarettes is something that directly impacts your health and wellness – it’s been linked to cancer, heart disease, and more. There’s no way to argue that it’s not bad for you, to put it simply. That’s a leading part of why so many have stopped smoking. In fact, teen smoking has reached the lowest levels in years and more and more people are putting down the smokes for good.

There are a lot of different tools out there people have employed, and while I firmly believe that here at Joseph R. Giove Clinical Hypnosis my hypnosis therapy is the single best way to stop, it’s worth mentioning some of the other options. These include things like patches, gum, and – most recently – electronic cigarettes.

While those fake cigarettes have become increasingly popular in the country and have indeed helped many stop smoking cigarettes, the reality is that they also bring plenty of risks with them including many that we may not fully understand just yet.

It’s important to take a closer look at electronic cigarettes and why you need to stop smoking them as well as traditional cigarettes. Once you understand why, you’ll be able to see why hypnosis therapy is a great option for anyone ready to break free of their habits.

What Are Electronic Cigarettes?

Electronic cigarettes, often just called ‘e-cigs’, are designed to simulate smoking in a number of ways. They look pretty much like the real thing, with an end that glows when you inhale and an exhalation of ‘smoke’ that’s actually vapor. Many of the latest models are larger, looking like boxes with a nozzle that you use to take a puff from.

No matter the shape or the style, these e-cigs work the same way at their most basic. Inside each one is a battery that powers a heating element. This is connected to a cartridge holding a liquid mixture of nicotine and various flavorings. When the fluid is heated it turns to vapor which is then inhaled like a traditional cigarette’s smoke would be.

Why Are They So Popular?

The main reason that e-cigs became so popular so quickly is simple – they allow users to get their daily ‘fix’ of nicotine without using a cigarette to do so. Since nicotine itself isn’t directly linked to cancer, the idea is that electronic cigarettes are a safer alternative to smoking and that they are the best new way to stop smoking. But that’s not entirely true.

The medical community is still divided on e-cigarette usage. But the facts don’t lie, and there are several things to consider where these e-cig devices are concerned. The respiratory system is very delicate, and the mucus membranes within it quickly and easily absorb virtually anything passing through them. As a result, e-cigs could expose your body to a lot of chemicals that impact your health. There are numerous risks worth thinking about where e-cigs are concerned including the following.

With no government oversight and little research done into electronic cigarettes, the reality of the situation is that while they look cool, offer a variety of flavors, and can help you stop smoking traditional cigarettes, these are still something that can directly lead to health issues and as such they should be avoided. Add in the fact that e-cigs aren’t cheap and it becomes clear that you need to take steps to stop.

Stop Smoking ANY Kind Of Cigarette

So by now it’s probably apparent that smoking any kind of cigarette – real or fake – isn’t something that’s good for your health. Stopping smoking entirely is important, but it’s not something that’s easy to do. That’s a big part of why so many people actually turn to these e-cigs. They offer a path away from traditional cigarettes.

But the health risks and the costs of smoking electronic cigarettes can’t be ignored, and taking steps to stop smoking everything is worth doing. Luckily, hypnosis is a proven option that can help you do just that. Numerous studies have looked into the effectiveness of hypnotherapy, and the experts agree that the results are real.

Best of all, hypnosis works without placing your body at risk of being harmed by any kind of carcinogen or chemical. The power of suggestion can help your mind rewire itself and make it easy to put down traditional cigarettes and throw out those e-cigs for good. In other words, it’s an all-natural and highly effective way to stop smoking and start enjoying a healthier life.